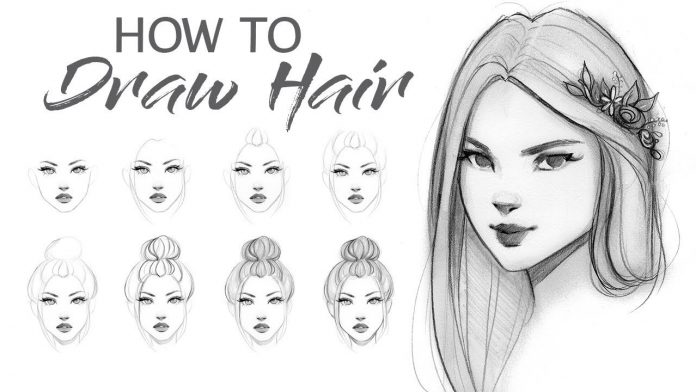 Even beginners can easily understand the tips on how to draw hair, such as the position of the tsumugi, the feeling of the bunch, and how to make the flow, according to the girl’s hairstyle.

There are many types of girls’ hairstyles. Do you ever feel that you can’t grasp the characteristics of your hairstyle while drawing an illustration?

In this course, we will carefully explain how to draw girls’ hair by length so that even beginners can easily understand it.

Please use it as a reference when drawing character illustrations!

Must-see for beginners! Tips on how to draw hair by hairstyle 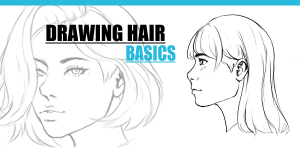 There are various types of girls’ hair, such as straight, long, and straight bangs. In this course, we will explain how to draw hair by classifying it into three main types.

Position your hair before removing your hair

The first thing I want to be aware of when drawing hair is the position of the tsumugi. Human hair flows down from the human hair. Before removing the hair, attach the atari to the top of the character’s head (tsumuji). Then, let’s also add atari so that the edge of the bangs and back hair is lowered from the tsumugi to the tip of the charges and back hair.

How to draw short hair

First, I will explain about short hair.

Please use it as a reference when drawing a lively character or thinking about a character who likes sports.

Inner winding is a hairstyle that makes it easy to create a girlish look even among shortcuts.

Instead of drawing a single piece of hair, remove “loose hair” and be aware of the fluffy and light image.

You can make an impression of a cute girl by giving a feeling of a bunch or making it fluffy as you go down from the tsumugi.

It is also a recommended hairstyle when drawing a little girl.

How to draw Straight Bangs

Next is a hairstyle called “Pattsun.” Straight bangs are hair that has almost consecutive bangs.

The trick is not to draw the bangs so that they are too jagged and uneven but careful not to make them too even.

If you add a little random jaggedness to your bangs, you will get natural hair.

Also, the point other than the bangs is how to draw the sides.

How to draw boyish hair

The end of the short hair is “boyish.”

A boyish hairstyle is a hairstyle with a vigorous habit, but if you continually keep in mind the balance between the tsumugi and the whole, you will not be too lumpy.

Boyish hair is a hairstyle that goes well with sports and especially active characters.

You can also give your character a distinctive character by drawing a “splash” of hair.

For example, you can add character to your character by adding a habit like animal ears. Boyish hairstyles allow you to design hair up, down, left, and right, so it is a hairstyle with a high degree of freedom in character design.

How to draw straight wave hair 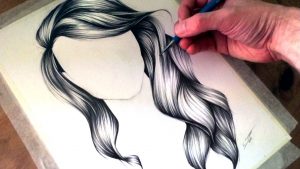 Next, I will introduce medium hairstyles. I will mainly touch on how to draw straights and waves.

Compared to the short hairstyle, the design range is more comprehensive, and you can make a wide variety of hairstyles.

First of all, I will introduce straight hairstyles.

The characteristic of drawing straight is that the part of the hair that touches the shoulder quickly gets inside, so the trick is to remove with that in mind.

In the illustration below, this is the part indicated by the red arrow.

Depending on the character, the hair ends can be splattered on the outside instead of being wound inward, so it’s a good idea to draw differently depending on the surface.

By the way, even though it is straight, it has longer hair than short hair, so you can bring out the character’s individuality by tying or rolling it.

The second medium hairstyle is a wave.

The trick when drawing a wave is first to imagine a fluffy paper and gradually give it a three-dimensional effect, as shown in the illustration below.

Let’s start with a simple shape and gradually bring out the hairiness. Imagine a lot of fluffy paper growing from a sword.

Also, if you draw all the hair with the same movement, it will look unnatural, so if you add a lagging strand in the wave, it will become a natural hairstyle.

Next, I will introduce the types of best skate shoes and wave hairstyles I have seen so far.

Various arrangements can be made, so please use it as an example when drawing an illustration.

Even if you have a simple hairstyle like a straight hairstyle, you can make various efforts such as dividing the bangs diagonally, raising them, and changing the length of the charges.

Like the hairstyle in the lower right of the illustration below, you can change the impression of the character by tying the hair.

Also, if you add accessories such as pins, ribbons, and cutlery, you will get a gorgeous impression at once.

In this way, you can make the viewer imagine the character’s character by changing the hairstyle. For example, the image of a character with a forehead gives a slightly stronger impression.

Please use it as a reference when drawing an original character.

How to draw long hair 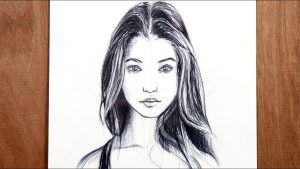 Finally, I will explain about long hairstyles.

In Long, we will mainly touch on twin tails and ponytails.

Since long hair is longer than medium hair, you can make various hairstyles, focusing on the points.

How to draw twin-tail hair

The twin tails have a very distinctive silhouette even in long hair and are also a popular hairstyle.

The point in drawing a twin tail is not to make the height of the knot different on the left and right but to draw it symmetrically.

The tied hair gathers at the knot (illustration below: red arrow), so be aware of that as well.

Even with the same pigtail, the impression will change depending on the volume and height of the hair, so it may be good to explore your taste.

Some popular characters have hair as long as their knees, so it’s a good idea to take the plunge and lengthen them to characterize your personality.

How to draw ponytail hair

The ponytail is the same idea as the twin tail, but since there is only one knot at the back, let’s draw while thinking about the line of the head.

In addition, you can make your hair look realistic by drawing the hairline firmly when you turn to the side. It is also recommended when you want to create a girlish look.

The hairline is smaller in area than the tied hair, but I like this hairline! Some people say that, so it’s a good idea to draw the details well.

Finally, I will explain about the long straight.

The basics for long are the same as for medium, but it’s a good idea to reduce the volume not to look heavy.

The long straight hair seen from the back can be made thinner toward the tip of the hair, or the end of the hair can be flattened to a certain length.

Waves are drawn in much the same way as a medium but have the characteristic of waving larger than medium.

Let’s draw separately, considering the number of waves and the height from which to make the waves.

How was it? In the video course, as a practical version, we will explain while drawing more complicated braids. Please check it!

In addition, Palmy also has a course that explains how to apply the hair, so please refer to it.