How to cook corned beef? 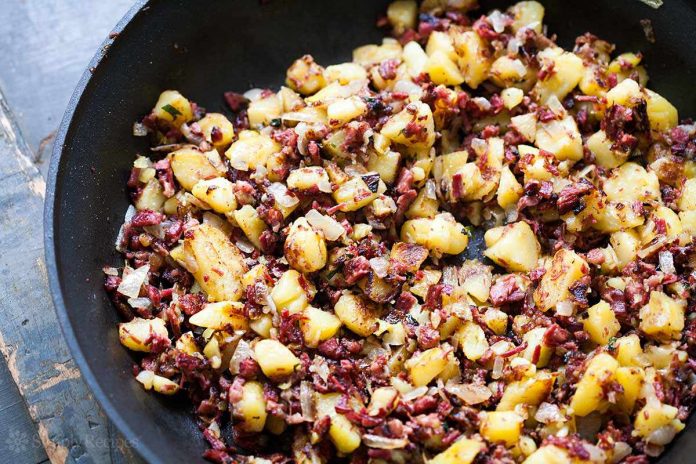 The English word corn for maize or grain used to denote – similar to German – a piece of grain, such as one made from salt. Corned beef is grained, i.e., salted meat, but historically every salted meat was named that way, regardless of which animal it came from. When you talk about corned beef today, you usually mean the well-known, rectangular tinned meat that has been chopped, salted, and then cooked to gel into a solid block. In this article, we read about How to cook corned beef?

In the Anglo-American region, corned beef is also freshly prepared. The result no longer has much to do with the canned product of the same name but somewhat resembles the pastrami that is now also common in our country. Making fresh corned beef is very easy, and the effort is limited. You have to allow for a good week for curing, but investing this time is worth it, as you will be rewarded with a real delicacy in the end.

Long-fiber beef is suitable for corned beef, and brisket is ideal. It is considered a “base” item and is accordingly cheap. For the curing rake, boil salt and sugar with spices in water. Optionally you can add curing salt. The meat has to stay in the cooled brine for 7-10 days, then wash it off and cook it with fresh herbs and root vegetables until soft.

The controversial curing salt is ultimately called nitrite curing salt and is a mixture of table salt and 0.5% potassium or sodium nitrite. While the desired dehydration of the meat during curing also works with pure table salt, the nitrite ensures the rich red color of the corned beef (and countless sausage products from your butcher’s shop), which is commonly regarded as pretty, by making a connection with the muscle pigment myoglobin and stabilizes the reddening of the meat during cooking.

In short: without curing salt, your corned beef will be gray – if you can live with it, leave it out. The taste will be minimally affected by it. In the first picture above, you can see the effect on closer inspection: The meat’s core has not turned red properly because the curing time was at the bottom of 7 days, and the nitrite obviously could not “work through” entirely during this period.

Freshly prepared corned beef has a dry and inimitably crumbly consistency. It tastes cautiously salty, slightly sweet, and highly aromatic and full thanks to the added spices.

For the brine to cook corned beef 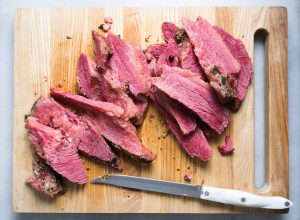